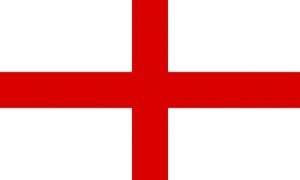 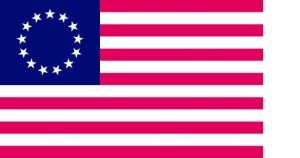 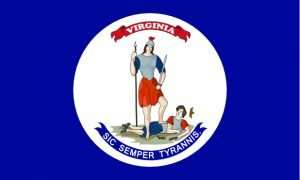 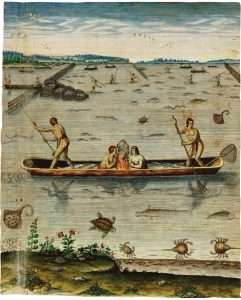 Native Americans lived for thousands of years on the lands that encompass what are now the Commonwealth of Virginia and America. In April of 1607, a small band of English colonists stepped ashore at the entrance to the Chesapeake Bay, raised their flags, declared the land to be their own, and named it Virginia.

This landfall and the years that followed set in motion the creation of the United States of America, the Commonwealth of Virginia, and early militias as predecessors to the National Guard. The histories of these three entities have been deeply intertwined from their beginnings.

Over 400 years have passed since those days. Virginia lands have seen revolutions, wars, disasters, and triumphs. The Virginia National Guard was there for every step of the journey, grew into an American legacy, and continues as a dedicated Guardian of Virginia and the United States of America. 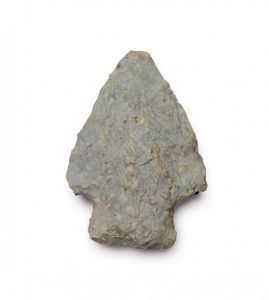 Archaeologists identified this prehistoric object found at Fort Pickett in Blackstone, Virginia as a rhylolite Kirk Stemmed projectile point (6,800–6,100 BCE). Although often called an “arrowhead,” it was likely a type of spearpoint that is commonly found throughout the Eastern United States. 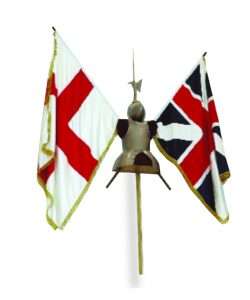 The Virginia National Guard Joint Force Headquarters recognizes the Jamestown citizen militia who protected the settlement during its earliest days by displaying a colonial helmet, breastplate, and a set of flags created for the building’s official opening in 2018. 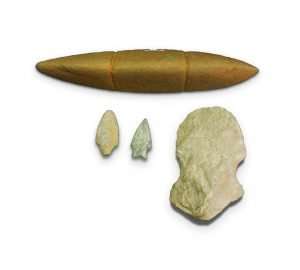 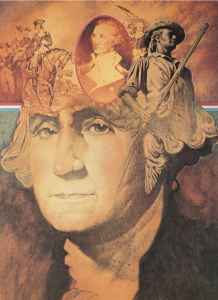 In 1753, George Washington was appointed by the Governor of Virginia as a major in the Virginia militia with authority over one of the state’s four districts. He later served with distinction in the French and Indian War and the Revolutionary War before becoming the first United States’ president in 1789. 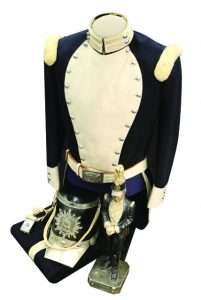 The Richmond Light Infantry Blues date back to 1793. Their distinct dress uniform included “fur” epaulettes and tall shako helmets, pictured here with a uniformed infantryman statue. During the Mexican Border Campaign, the Blues were temporarily redesignated as the 1st Virginia Cavalry while they served along the Rio Grande. 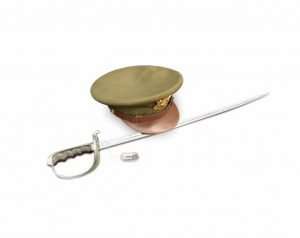 These dog tags, hat, and sword belonged to Richard Ryan, the Company Commander of Company G, 183rd Infantry Regiment during the Interwar Period. He later served on the staffs of General H. H. Arnold and General Douglas MacArthur during World War II. 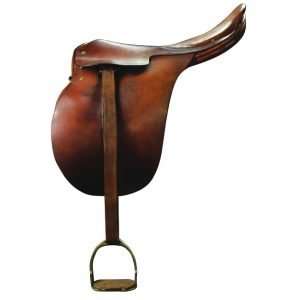 The Richmond Howitzer Company was founded in 1859 shortly after John Brown’s raid on Harper’s Ferry. In World War I, the company was redesignated as Company A of the 111th Field Artillery Regiment. The unit’s cannon crews used McClellan saddles like this one until 1933 when motor vehicles replaced their horses. 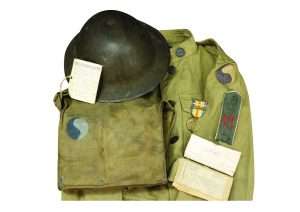 Willie P. Smith of Richmond, Virginia wore this uniform, helmet, and gas mask (which still includes its original instructions) while he served in Company B, 116th Infantry Regiment during the First World War. He brought home this German infantry regiment uniform shoulder strap as a souvenir. 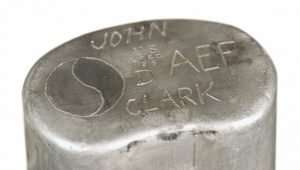 Many soldiers in World War I marked their canteens, cups, and mess kits with their personal and unit information. This carved canteen cup belonged to Private John D. Clark, an infantryman in the 115th Infantry Regiment, 29th Division. 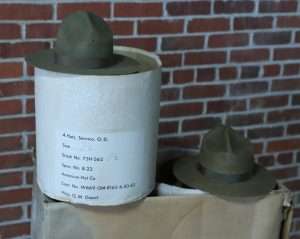 Unique to the collection is this original shipping cylinder for M–1911 “Montana Peak” Campaign hats, which still holds four unissued 1916–dated hats. Made of rabbit pelts, the hats’ wide brims provided much needed shade from the sun for Virginians serving on the Mexican Border in 1916. 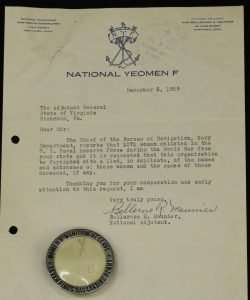 This 1929 letter documents that 1,071 Virginia women served in the U.S. Navy during World War I. The letter is displayed with an extremely rare ID badge that one woman wore while serving at the Women’s Munition Reserve Seven Pines Bag Loading Plant in Penniman, Virginia. 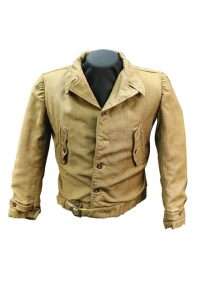 This jacket belonged to Lieutenant Colonel Thornton Mullins, who commanded the 111th Field Artillery Battalion on D–Day, June 6, 1944. When his cannons rapidly sunk on Omaha Beach, he shouted, “To hell with our artillery mission, we’re infantrymen now!” He sacrificed his life while leading troops through deadly enemy fire. 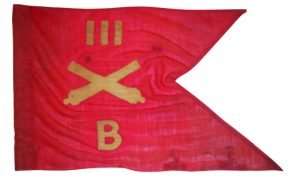 Battery B, 111th Field Artillery Battalion carried this guidon on D-Day. The slightly darker areas are embroidered repairs of holes made by German bullets that morning. 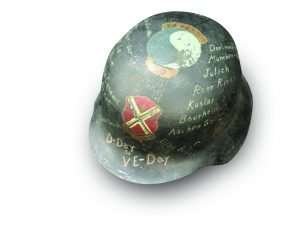 A soldier marked a diary of the war on this German Model 1942 helmet. The front and top reflect that he was from Company H, 116th Infantry Regiment, and that he served from the D-Day landings until the end of the war. 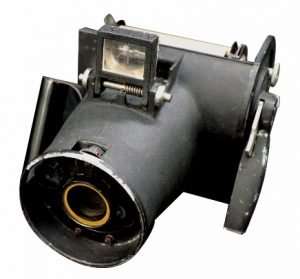 In World War II, this heavy and extremely durable camera took crucial aerial photographs of enemy terrain and positions from American observational aircraft. It could capture fifty images per film roll and amazingly remained in use by a Virginia Air National Guard photographer until the 1990s. 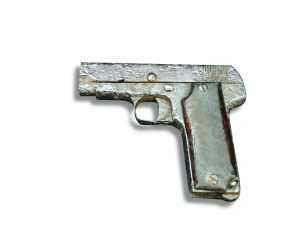 This Spanish-made pistol demonstrates the constant need to re-use old or obsolete military equipment in wartime. It was sold to the French Army during WWI, captured by the Germans in WWII, and eventually recovered in the 1990s from the Ardennes battlefield. 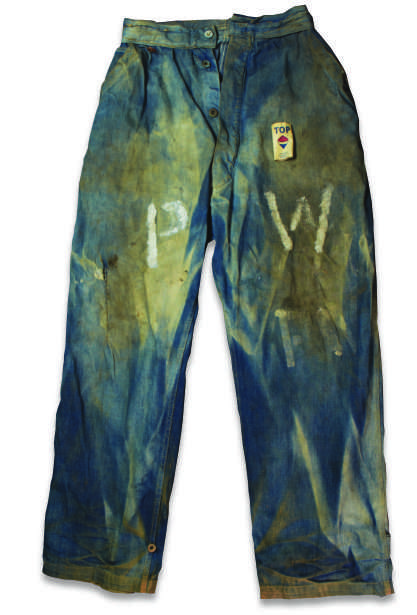 A German Prisoner of War wore these jeans painted with “PW” while he was held at Fort Pickett during World War II. He sewed the waistband much tighter to fit his small frame and left his cigarette rolling papers in his pocket, which are pictured here above the “W.” 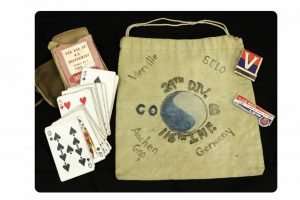 A Company B, 116th Infantry Regiment soldier recorded his personal history in World War II on this small ditty bag. It contains a pack of “V for Victory” matches, airmail stickers supporting the war effort, and a pack of well-used U.S. Government-provided playing cards. 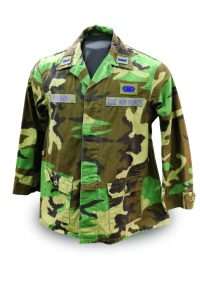 A First Lieutenant in the Virginia Air National Guard wore this maternity uniform while serving around 1999. 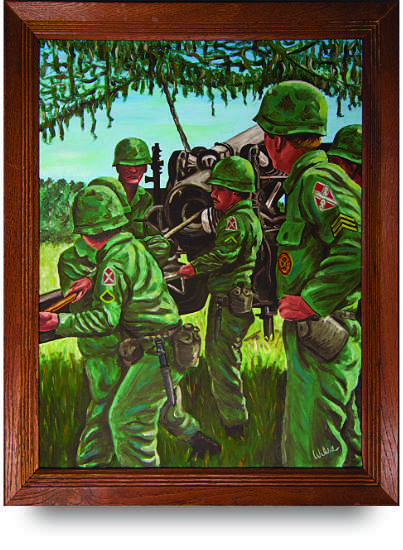 Captain Ed Wiles, a Battery Commander of SVC Battery and former A Battery, painted this scene of a #2 Gun Section titled Summer Camp 1968, Camp Pickett, Virginia. His Battalion presented the painting as a gift to the Richmond Howitzers Association on May 30, 1969. 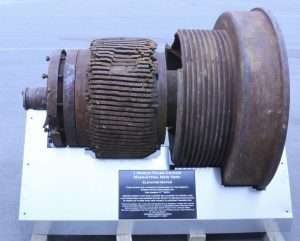 This service elevator pulley from one of the Twin Towers at the World Trade Center is a silent but powerful monument to those who lost their lives on September 11, 2001 and to all Virginia’s Operation Enduring Freedom and Operation Iraqi Freedom veterans and their families. Lest we forget. 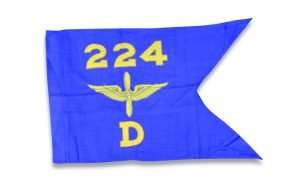 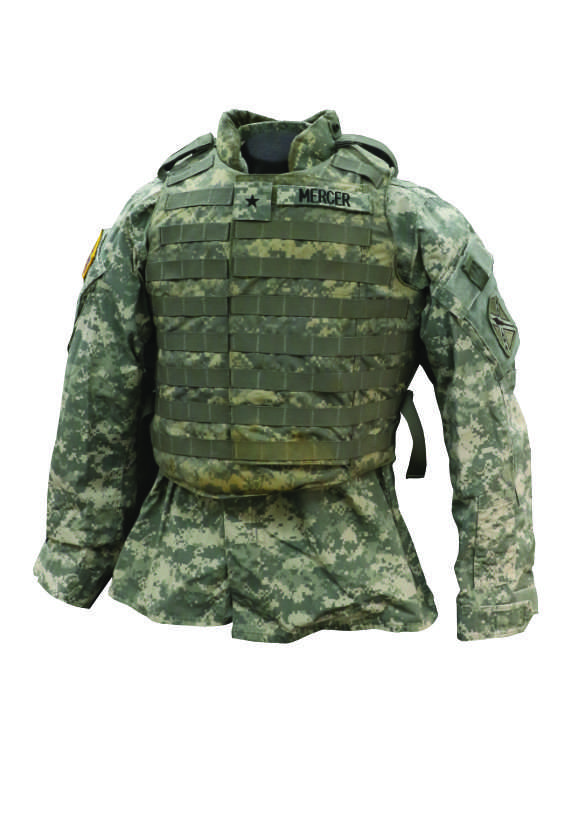 A Virginia National Guard officer wore this protective body armor and Army Combat Uniform (ACU) during his service in the Global War on Terror. The characteristic Iraqi red soil is still deeply embedded in his gear. 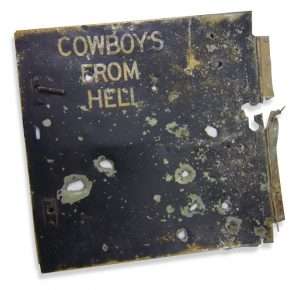 A Virginia National Guard M-915 “gun truck” was hit by an improvised explosive device (IED) near Tikrit, Iraq in 2008. The blast removed the truck’s paint and revealed “Cowboys from Hell” written on its steel battery cover. All three 1-116th Infantry soldiers were wounded but returned to duty. 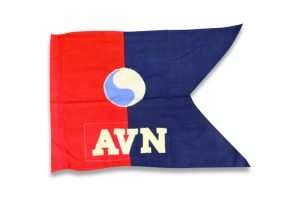 The 29th Combat Aviation Brigade’s motto of “Free Dominion” reflects Maryland’s nickname as “The Free State” and Virginia’s as “The Old Dominion.” Their dual state union is reflected in their guidon through the iconic blue and gray 29th Infantry Division insignia in its center.